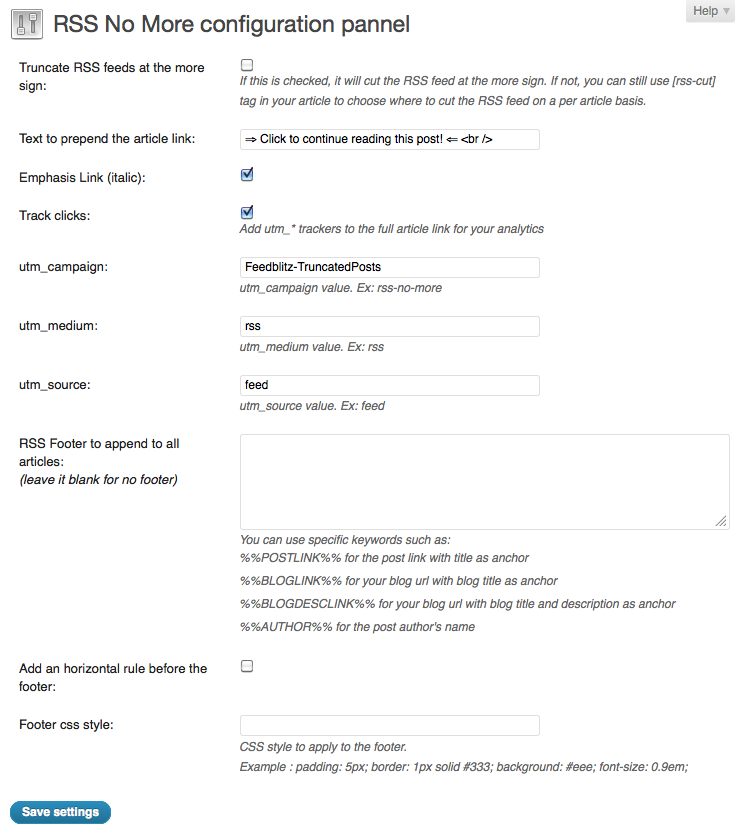 Mention partial RSS feeds to another blogger and you’re likely to send them off on a tangent about how they always unsubscribe to a site that doesn’t publish a full feed and they would never use a partial RSS feed on their site.

Partial RSS feeds are annoying – most of the time.  But there are good reasons to use them, too, and I believe that, if used correctly, you can utilize a partial feed in such a way that neither annoys people nor causes unsubscribes to your RSS feed or newsletter.

Why you’re annoyed by partial feeds.

Most partial RSS feeds feature just the headlines plus a very small excerpt of the article.  The excerpt is usually unformatted, without paragraph spacing or images – and sometimes, it even strips the excerpt of links (yuck!).  The feed rarely gives enough of the article to pique the reader’s interest and entice them to click over, and even if the first few words seem marginally interesting, many readers will abandon the post because it’s hard for the eye to track a six-line paragraph (which is probably not a paragraph on the site itself).

Some sites publish truncated feeds of very short articles, so that when you click over, you realize there were only about five words left that weren’t included in the feed.  Annoying, and this very much discourages people from ever clicking through again.

It’s these things that I believe make partial RSS feeds so frustrating to so many.  Now that we know why people hate partials, we know what things to avoid when we are creating a partial RSS feed that doesn’t annoy.

Here’s how to do that:

How to use partial feeds without ticking anyone off

First, set your feed to publish in full – you may need to check your WordPress settings, as well as your feed service, such as Feedburner or Feedblitz.  Most of the problems outlined above are caused by automatic generation of partial feeds.  You want to truncate your feed in a way that makes sense to humans.  No human would ever choose to end a partial feed mid-sentence, but that’s often what happens with the automatic partial feed settings. 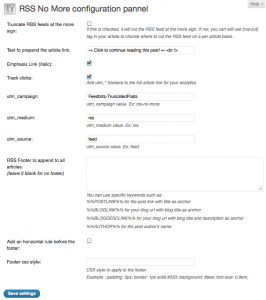 Then, I recommend using the RSS No More plugin that’s on WordPress.org.  This will allow you to choose to cut the feed wherever you want.  It will leave your links, images, and other formatting intact so that you can give your subscribers enough of a preview to be interested enough to click over, rather than being annoyed at not knowing whether or not the article is worth it.

You can also customize what appears at the bottom of your partial feed – I would recommend using a call to action such as “Click here to read Name Of Article” and even inserting the arrow character (→) to draw attention to the link.

Where to cut the feed

I love the fact that you can choose to use or not use a partial feed on posts with the RSS No More.  If you publish a short post, you can do nothing and it will publish the full post in your feed.  When you publish a longer post, insert the proper tags after the first paragraph or two and an image.  This is much less likely to annoy your readers when you only use a partial feed some of the time.

You can also use the plugin to cut the feed to make people click over for functionality that doesn’t work properly in RSS.  For instance, my sites of Denver Bargains and Springs Bargains using a printable grocery shopping list feature that doesn’t work in RSS – you have to visit the site for it to work.  So, I’ve chosen to truncate my RSS feed after my intro paragraphs so that people aren’t frustrated by trying to use a feature that will never work in their RSS reader.

I also truncate my RSS feed before giveaway entry forms.  Periodically, companies will sponsor giveaways on my sites and I use an entry form that I’ve designed in Gravity Forms to accept entries.  I publish the post in full in RSS until you get to the entry form, and then manually truncate the feed using the RSS No More shortcode [rss-cut]  to require that people click over to complete the form to enter the giveaway, which solves a whole host of problems.

If you have a particular functionality that you want people to click over to the site for, you can customize your link at the bottom of the RSS feed to say something like “Click here to continue reading this post and create your printable shopping list!” so that they understand that there’s a very specific reason they need to click over.

Partial feeds can be used wisely

Partial feeds don’t have to be annoying.  They can engage readers rather than turning them off if you understand why people are usually turned off by partial RSS feeds.

A few minutes of setup with the RSS No More plugin (or a similar one, if you can find it – though I’ve been unsuccessful at finding any other options) and you’re on your way to preventing content theft or driving RSS readers to your site without frustrating anyone!